In haar Engelstalige studie beschrijft mevr. Noot het volgende: ‘We shall uphold, the centuries-old tradition of the Dutch Navy, that has already been demonstrated in European waters, this now shall be in service of preserving our regions [in the Far East]’ Lieutenant-Admiral C.E.L. Helfrich, Commander in Chief of the Netherlands Indies forces, wrote on 9 December 1941 after the Dutch Minister of the Navy and the Commander in Chief of the Navy, J.Th. Furstner had wished him the best of luck in the conduct of war against Japan. In reaction to the Japanese attacks on Pearl Harbour, Malacca and Singapore on 7 December 1941, the Netherlands government had declared itself at war with Japan because of hostile acts against ‘two powers with which the Netherlands entertains most friendly relations’. 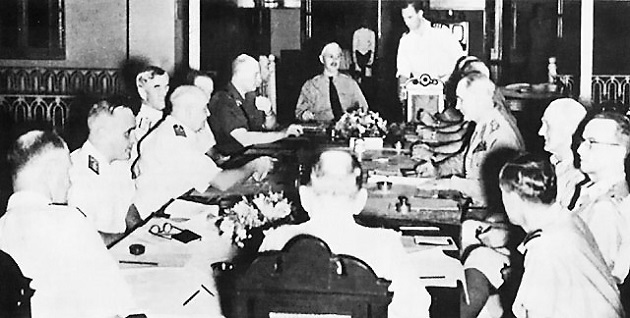 As early as 1912 the Dutch government had identified Japan as a potential threat to the Netherlands Indies. Therefore the Dutch had designed a fleet program to match the Japanese strength. During the mid-1930s Japan actively started conquering territories in the Far East in order to realize the New Order of Eastern Asia, a confederation of Pacific territories under Japanese leadership. From this point on, the Japanese conquest in Southeast Asia became a great threat to forces with interest in the region, including the United States and Britain, as well as the Dutch, as colonial rulers of the Indonesian archipelago. On the eve of the Second World War the Dutch defence potential was no match for the Japanese forces. Thus, the Dutch started looking for an alliance to withstand a possible conflict in the Pacific theatre with Japan. However, the Dutch had maintained to uphold a longstanding tradition of political neutrality since the beginning of the nineteenth century, and had even managed to stay out of the First World War because of this. But soon it became evident that the policy of neutrality would not keep the Dutch out of the Second World War. So the Dutch had to re-evaluate their position, in order to survive a future conflict. Whereas the upside of the Dutch policy of neutrality was that it had been able to avoid involvement in previous wars, the downside was that they were not prepared to actively take part in a war should one become inevitable. Eventually, after several official and unofficial conferences and talks with the allied parties in the Pacific, and more specifically after the shock of the Japanese attack on Pearl Harbour on 7 December 1941, a unified command, called ABDACOM was established on 28 December 1941. ABDACOM (American-British-Dutch-Australian Command) intended to fight the Japanese invasion of Southeast Asia and to protect the British and the Dutch colonies in this region, as well as the Philippines and Australia. The efforts of ABDACOM to prevent Japan from taking over the Allied controlled territories in the Pacific failed. On 25 February 1942 ABDACOM was dissolved with disastrous consequences for the Allied presence in the Pacific. Two days later, on 27 February the Battle of the Java Sea resulted in a great loss for the Dutch fleet and the eventual loss of the Netherlands Indies. The efforts of the ‘unquenchable soldiers of the British Commonwealth’, ‘the men of MacArthur’ and the ‘band of “indomitable Dutch”, with their Indonesian comrades in arms’ failed to stop the Japanese aggression.